There are so many types of beers out there, how do you know which is the best beer for beer can chicken? Let’s dig in and discover the truth.

Beer can chicken is one of the most popular foods to cook on a grill or smoker. And that’s not very surprising, is it?

I mean c’mon…it’s beer, chicken, and a grill. What’s not to love?

Plus it looks really cool! There’s an element of fun and showmanship when it comes to beer can chicken. Just watch your friend’s faces light up when you take it off the grill.

They’ll think you’re some kind of Michelin-starred chef with special training when all you really did was stick a can of beer up a chicken’s butt.

Which Is The Best Beer For Beer Can Chicken?

There are so many types of beers out there including lagers, stouts, IPAs, sours, Belgians, and many more. How do you know which is the best beer for beer can chicken?

Well first of all, anytime you cook with alcohol you should use something you like and would drink yourself.

That means you shouldn’t cook chicken francese with a cheap $5 bottle of wine you’d never drink out of a glass, and you shouldn’t make beer can chicken with beer you don’t like just because it’s cheap.

If you cook with crappy ingredients, don’t be surprised if you end up with a crappy meal.

I’ll give some examples of beers I think pair well with beer can chicken below. But to me, the best beer for beer can chicken is whatever type of beer you enjoy drinking. It’s unlikely you’ll be able to actually taste the beer anyway. Let me explain…

Most people think beer can chicken stays moist and delicious because as the the beer in the can bubbles and steams infuses the bird with additional flavors and moisture.

But there’s a problem with that theory. Beer is mostly water, and water won’t begin to boil until it reaches 212 F.

You only cook a chicken until it reaches an internal temperature of about 160 F to 165 F. The beer inside the cavity physically can’t reach a high enough temperature to even begin to boil and steam so there’s no way the beer is actually providing any actual flavor at all.

Don’t believe me? Listen to what one of my BBQ heroes says about it. Here’s a short video of Meathead from AmazingRibs.com discussing the myth of beer can chicken:

Is Beer Can Chicken Even Safe?

The simple truth is there are some health concerns with eating beer can chicken.

Specifically, there’s a risk of harmful toxins being introduced into the chicken during the cooking process.

Aluminum cans have been tested and approved as a beverage holder but not as a cooking device. Beer can exteriors have never been approved for food contact. And while the aluminum itself is probably harmless, what about the dyes and inks used in the label on the can exterior?

Those inks are meant to decorate the outside of a beer can, not be rammed up a chicken’s but and heated over a live flame. There’s the possibility that some of the inks could leech into the chicken meat.

Some beers like Guinness draught have a small plastic widget that uses a nitrogen filled capsule that surges with bubbles when the can is opened. That widget is plastic and potentially harmful fumes could be released if it melts inside your chicken.

At best, the plastic and inks could give your chicken an odd taste. Worst case scenario they could be infusing harmful chemicals into your food.

How To Make Beer Can Chicken Safely

If you want to make beer can chicken without risking the health and safety of your guests, there’s a simple and inexpensive alternative.

The secret is to use this ingenious device designed specifically for making beer can chicken.

The beer can chicken holder is made of 100 percent stainless steel. It’s approved for contact with food so there’s no fear of toxic chemicals ruining your bird.

You can fill the can with beer, hard cider, wine, chicken broth, apple juice, or even bourbon to get whatever flavor profile you’re looking for. When you’re done just toss everything in the dishwasher. 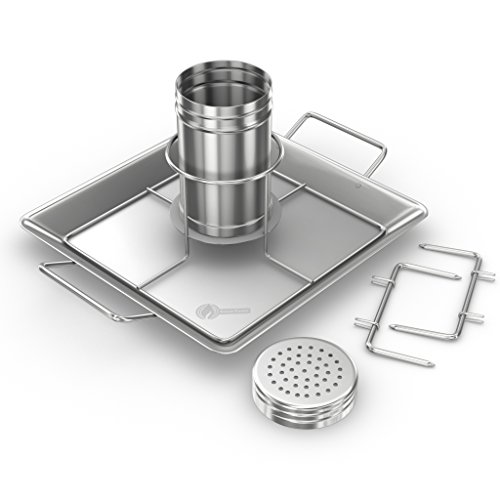 Prices pulled from the Amazon Product Advertising API on:

Product prices and availability are accurate as of the date/time indicated and are subject to change. Any price and availability information displayed on [relevant Amazon Site(s), as applicable] at the time of purchase will apply to the purchase of this product.

Suggested Beers For Beer Can Chicken

Remember the best beer for beer can chicken is always a beer that you enjoy drinking yourself. That said, there are some types of beer that are more popular with grillers, so let’s quickly go over each style and a few examples from each.

Lagers are the most popular beers in the world. They’re clear and golden with a flavor that’s light and crisp. Lagers come in numerous sub-varieties including Pilsner, Oktoberfest, and Helles.

Many of the biggest and well-known beer brands are known for their lagers, including Budweiser, Miller, Coors, Heineken, and Sam Adams.

Porters are a dark beer that originated in 18th century London. Dark and rich with a roasted flavor, porters are great for winter drinking.

Some of the most popular porters available include Founders Porter, Deschutes Black Butte Porter, and Einstock Toasted Porter.

Stouts are closely related to porters. Dry stout is the best known version of this delicious beer that was made famous by Arthur Guinness in 18th century Dublin.

Pale ale is a popular style of beer known for a flavor that’s both hoppy and malty, with a golden amber color that falls between light lagers and dark stouts. Pale ales were first created in England, but the style sparked the American craft beer explosion which is still in full bloom with small breweries opening all over the country.

Some of the tastiest and most popular pale ales include Sierra Nevada Pale Ale, Bass Pale Ale, and Oskar Blue’s Dale Pale Ale.

Take a pale ale and crank up the hops and alcohol content and what do you get? An India pale ale, or IPA.

IPAs are super hoppy and bitter. and their popularity is fueling the American craft beer scene like nothing that came before. Popular IPAs include Sierra Nevada’s Hazy Little Thing, Lagunitas Little Sumpin’ Sumpin’, and Dogfish Head 60 Minute IPA.

Ok, now for the TLDR version: the best beer for beer can chicken is whatever beer you like best. You won’t really be able to taste much, if any, of the actual beer flavor because you’ll never really get it hot enough to boil and steam.

That said, beer can chicken is a unique and fun cooking method that never fails to impress your guests. Every backyard griller should try it at least once.

Hey! My name is Mike and I'm addicted to grilling, smoking, and cooking outside on a flat top. From pork butt to pancakes, it's all good!